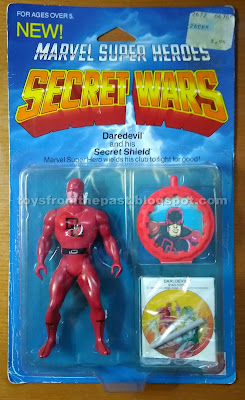 Despite being a short collection, Secret Wars have a few hard to find figures, mostly if you want to have your figures 100% complete. Some accesories are very difficult to find, and the shield images are also often missing. I would like to get all figures with their original accesories, but the shield images could be repro, that doesn´t bother me.

Daredevil is one of the "difficult" figures because it came with his baton, which is small and quite simple (might be mistaken for something else). In loose figures it is almost always missing. Another usual flaw is a paint loss in the face, but because this figure was on card, the face was perfect, so I was lucky to find this opened (American) blister card with the figure and everything else. 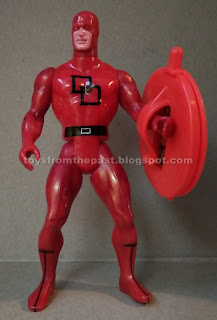 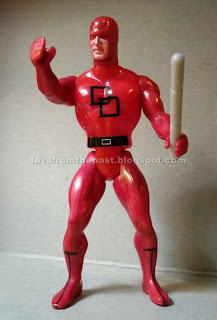 Or I thought I was lucky. The price was not so low, and when I received the figure, the limbs came with some kind of red powder that I had to clean up with a humid piece of cloth (that got tainted red in the process). The plastic is maybe deteriorating and I do not know how it will evolve during the next months. I left it perfectly clean last December and by June it was still clean, I wonder if it will keep being clean, or if the plastic will deteriorate further. The chest of the figure is perfect, I would say it is made of a different harder plastic. While the limbs are more flexible.

It is the only figure I have with its blister card, so maybe it is a great opportunity to take a closer look to it. 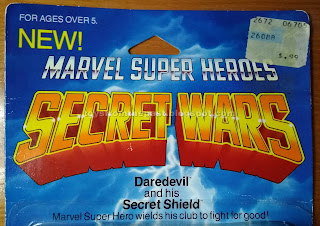 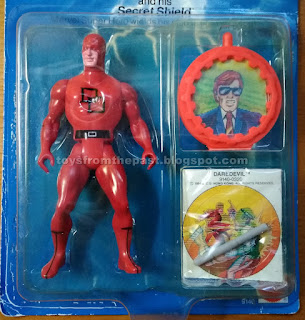 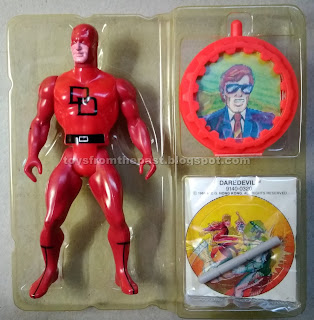 The front of the cards are all the same, a blue background with the big logo on top, and the name of the figure in rather small letters between the collection logo and the bubble. It is noted that the figure includes a holographic shield, which is, so to speak, the main attraction and sales argument. The bubble is huge because it covers the figure, the shield and the lenticular images in its little plastic bag and, if present, additional accessories like little guns.

The back of the card is more interesting because it shows a very short filecard (name, height, weight, super powers and weapons) an a mini comic with some action scene starring the figure attached to the card. A backcard catalogue is always available. In this case, it shows the figures from wave 2. And finally in the lower part of the back card, there are some graphic instructions on how to use the holographic shield plus the content and the copyright notice. 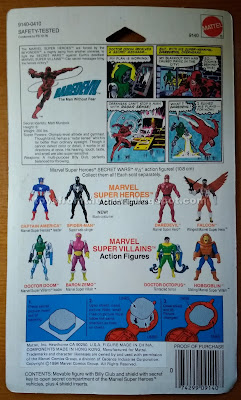 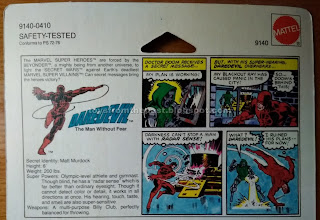 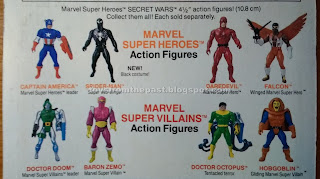 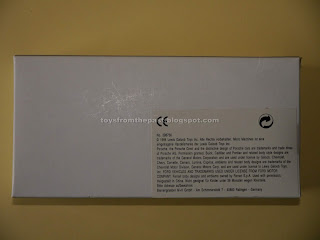 In the last year, I found two promotional packs (from different sellers), each of them including two complete collections from the mid 90s.

They come from Germany in a white box with several copyright (1994) and license notices in German (same sticker in both sets, even though one of them does not include cars from the brands that the license indicates: Ferrari, Chevrolet...), and a German address. 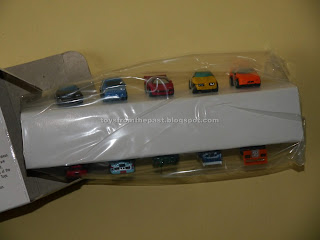 The first one has two collections of great racing cars: Ferrari, Porsche, Ford, Mercedes... some of the greatest brands of all times are represented. 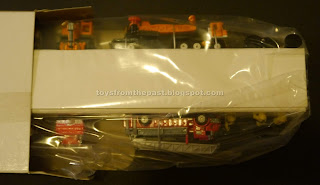 The second one has a set of firefighters and a public workers, each of them with 3 vehicles and 3 people, where one of the vehicles is a "bigger" one: a long fire truck with ladder or a mobile construction crane.


They are very rare, I have seen them only from one seller each.

The sport cars set was offered to me by a seller (not on eBay) and I bought the only two boxes this person had. He told me that they were a present for visitors at a car fair in Vienna by the mid 90s, what I found very interesting. Promotional give-aways are always hard to find.
The collections included in this pack are: #17 Decades: The '80s and #20 Hall of Famers, both from 1995.

The firefighters/public workers set was for sale on eBay and the seller had many of them (I bought three), so I guess there are already many out there in the hands of MM collectors.
The collections included are: #32 Road Construction and #33 Fire Rescue, both from 1995. 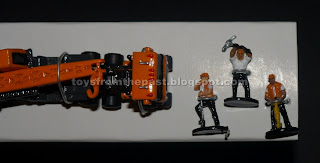 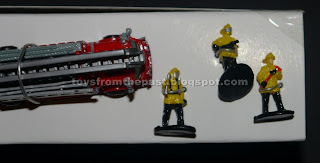