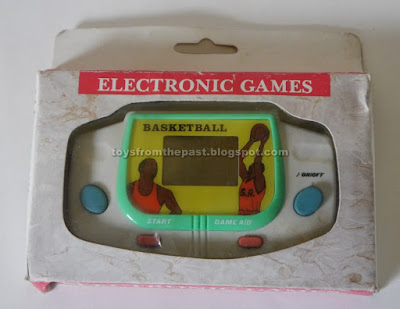 Game Watchs became really popular by the mid 80s. Most kids back then wanted a Casio watch with chronometer, alarm and as many other functions as possible) and then a Game Watch. There was no Game Boy yet, so this was the “top” in electronic games…

Well, not this game in particular, but some made by Nintendo with double screen and most complex controls (up, down, left, right and two buttons). Those were great games, and very expensive at the time. Even today are very sought-for and very expensive to find in good condition.

The toy I am presenting is the cheap alternative to those Nintendo or Casio games. As a kid I had two of them that I will rescue for a future entry. In the first one I had, you had to move a trampoline to avoid that some gymnasts fall and hurt themselves. The second one dealt with basketball players that passed the ball to each other until the ball was thrown to the basket. 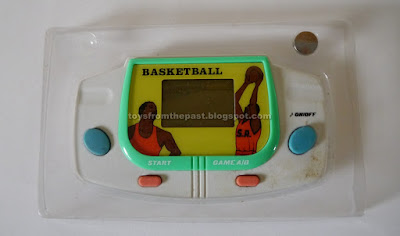 This third game was found in a flea market several time ago, as one family that worked as travelling sellers decided to sell some stock that they had from the 80s and the 90s. Every piece costed one euro, so I picked this machine. 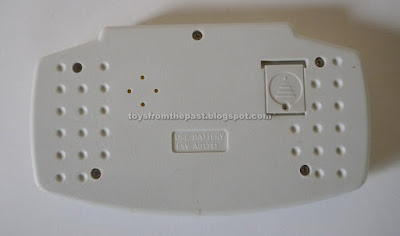 Note that the controls are limited to two buttons (left and right) and then you have “Start” and “Game A/B”. The A and the B are usually a difficulty level mark, so, one you master A, you can play a little longer with the B-mode before it becomes too boring. The thing about these games is that they had no-end, so you could play for the infinity, each time faster and with more and more balls, gymnasts or whatever your game was about.

I don’t think this machine has any interest for collectors today, note that it tries to imitate the current arcade machines, in which the screen was usually framed by some figures or illustrations of the game. Back then, the graphics were not very good, so any hand-made illustrations would help the player to go into the story in a much easier way.

This machine comes with a rather poor box (original, though), two instruction sheets: one generic in English, and the translation to Spanish, and one battery, which after 20 years, I’d better take it to a recycling-spot. 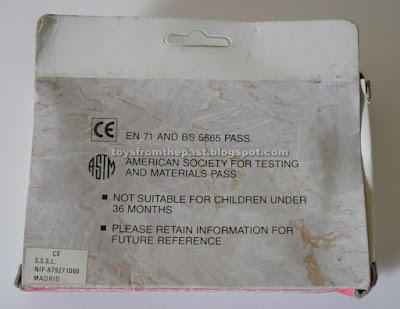 And why game-watch? Because on top of the game, the machine had a clock and you could see what time it was. I think some also had an alarm, but not this one.