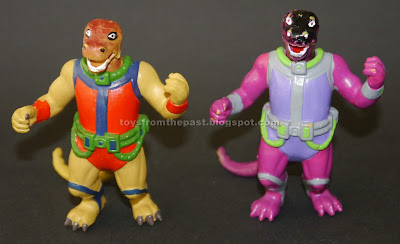 In a previous entry (#629) I presented this bootleg series, and I already mentioned that there were only two figures/casts available. I also mentioned the figures in "rarer" colours (not yellow/orange). I even put some pictures of the second figure, but that figure was missing its tail.

Now that I own a complete figure, I will do another entry to show it. This figure’s body seems to be based on Bonehead, one of the main characters of the Dinosaucers cartoon, although, the head I would say belongs to Rex, the leader of the Tyrannos. It is difficult to say, because the uniforms that the different characters wear are similar to each other. 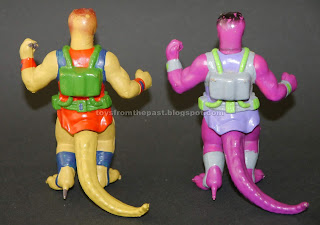 Unfortunately, the design is not very good, and the tail does not fit very well. Many second hand figures of this kind come without the tail. This was somewhat different in the figure shown before, in which the tail fits much better, and it is almost always complete.

Note also that this figure has one of the heads I was missing in my collection. It is similar to another one shown before, but this one has an open mouth, so I would say this one is Rex and the one with the open mouth is Bonehead. Now I am only missing one head (Ankylo, the Ankylosaurus) of the 6 available originally. As mentioned in the first entry. Each "body" came in a blister pack with 6 different heads.


The second figure shown in this entry is also made out of the same cast, but it is painted in a rare purple colour, and there is another picture on the Internet with green skin. All figures whose skin is not the classic light orange, is rare. Why didn´t the manufacturer use different base colours? In the TV series, the dinosaurs have different skin colours. This way, children may have bought several dinosaurs of each kind to cover more characters. 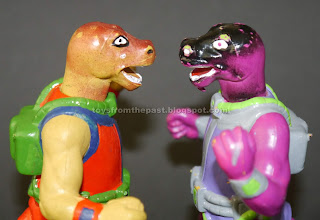 Interestingly, the base colour of the head is green, and the base colour of the body is brown. They had to use more paint and more time in the process of painting the figure purple than in the more common figures. Maybe the purple figures were a first release, and later they decided to cut down the costs by not producing these anymore? 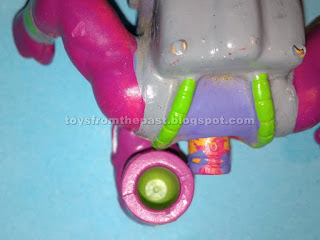 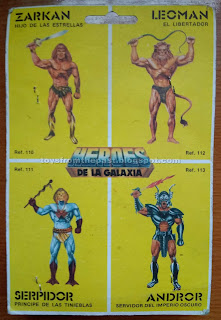 Last month I joined many other Masters of the Universe fans worldwide to celebrate the 35th anniversary of this great toyline in Spain. A friend of mine with a few other colleagues is writing a book about this topic that will be published soon. The title is "Yo Tengo el Poder: La Historia de los Masters del Universo en España", haven't you heard about it yet? Visit their Facebook site for all information regarding this topic, and don't miss the release!

Note that the book "Yo Tengo el Poder" does not only talk about Mattel's Masters, but also about other figures that bootlegged or were inspired by them, I am quite sure they will extensively cover this toyline we are going to talk about today, so if you are interested, you will be able to read more there.

I will start this time with the blister pack, reminiscent of the Star Wars movies, with a Tie-Fighter on the right side and another spaceship on the left, both in front of some unknown planets. The logo of the collection is clearly made after Masters of the Universe. The backcard shows the first 4 figures, although there is a second type of cardback that shows 8 figures, the complete collection.

Note that the figures are clearly inspired by He-Man, Skeletor, Beast Man, Teela, plus other characters that share characteristics with other Masters or characters of other movies. I own two figures, both in their blisterpacks:

Andror, the server of the Dark Empire is a remarkable character for having a fire sword and some metal armour and mask that gives him a rather menacing look. Among the first four, is the only character that does not have a clear counterpart in the Masters of the Universe world. 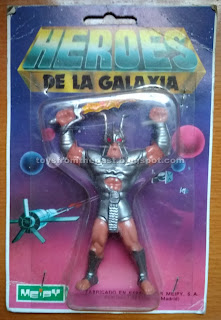 Tara is the only woman in the collection and comes with a sword and is wearing some kind of bikini. Interestingly, this amazon warrior does not appear in its own backcard 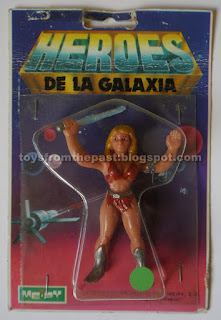 All figures come with exchangeable weapons and the blister is fixed to the card with staples.

These figures are very interesting, like all bootlegs are, and not much is currently known about the company. Meipy also made some other plastic figures (like the Meipy-Ñecos) and also other novelty products for kiosks like hairspins. There is an interview with the company owners in the Coleccionismo de Juguetes magazine nr. 13, but I haven't read it. Surely very interesting. 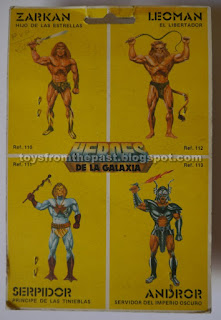 The second type of blister is this one that shows eight figures instead of four. Here we can observe the characters Zarkan (He-Man with longer hair), Serpidor (Skeletor with a reptilian twist) and Lioman (pretty much Beast Man).

Also present are Tara and three more characters. The first of this triplet is Icaron, a winged warrior the reminds me strongly of Pygar, a character in Barbarella (Roger Vadim, 1968). This character is the only one using a firearm.

Finally there are Volcam and Gladiator, two figures very similar to each other that look like a crossing between Man-At-Arms and a Roman gladiator. Volcam has a club as a weapon and Gladiator an axe.

I wish I had more of these figures. If you want to see all of them, you can also visit coleccionismo80-90.blogspot.com, where Pablo has collected all blisters except one (but has this figure loose).

In my backcard somebody wrote with a pencil the price of the figure: 200 pesetas (that is 1,20 Euro). I think the price is original (I mean, it was written back in the mid or late 80s). I would say the price is quite high for such a toy, what maybe explains why they were not sold massively and are difficult to find nowadays.

Although I never saw them for sale in the 80s, they were widely available until somebody (or maybe some people) decided to take all of them from the popular auction site where they were available. Now there is none (or at least none complete with its accesory). Maybe they become valuable collectables in the next years, who knows?


Read more about Masters of the Universe in these links!


All Masters of the Universe stuff

Masters of the Universe (vintage collection)