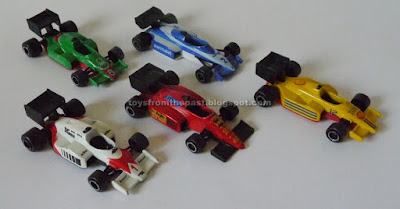 There was a first entry dealing with the first F1 models made by Majorette, and since I am a great F1 fan, I was willing to continue talking abouth the other F1 made by this same French manufacturer. You can review the first enry here: #587.

So, those previous models (that were issued in 1977) were already quite old by the beginning of the 80s, they simply looked outdated. Majorette kept them in the 200 series until 1982, and in 1983 and 1984 the Shadow was available in white instead of black. Then it was also removed from the series.
But in 1986, there was a complete new set of 4 F1 race cars. These looked much more modern, and represented interesting teams that were racing that year:

There was also a 300 series reference that included a Jeep, a towing hook and a 238 “F1 Racing” model. This reference (the same number) was also available with other models during the late 70s (see #587).
In 1989, the reference number 238 changes its decoration from Benetton green to yellow "Tictel RN12" that, to my knowledge, was a fictitious decoration (not based on any official team from the F1 championships). In the 318 reference, the model was also changed, that’s the one I got as a kid. 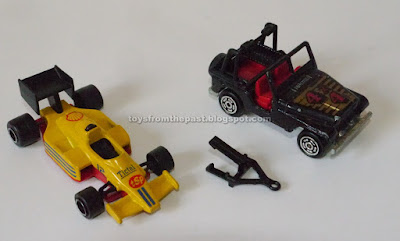 
One year later, the 238 gets a new yellow decoration “Racing”.
In 1992, the 238 is changed again to light blue, while the McLaren is discontinued from the standard “200” series, but is still available in bigger car packs with an slightly different “A. Senna – Honda” decoration.
In 1993, the 238 turns green and has “Bolids” decoration.
All the changes in 238 also apply to 318.

Finally, and after 9 years, a new F1 cast is prepared to replace the old references yet available. The new model would carry number 213 and was first available in blue and yellow. Still in 1995, the 238 was available in a new yellow decoration.

In 1996, the 238 reference is finally discontinued, but the Ferrari is still available after so many years! After all, the red decoration never changed much in the Ferrari F1 Team. The old Brabham casts is sent to Novacar and they would release two decorations, the first one in black and another one in yellow, as you can see in entry #325.

(sorry again for the quality of these 3 pics...)

The reference 213 would be released during a long time with different decorations (purple, yellow, orange), and the Ferrari would still keep going a few years more. In 1997, considering that the cast was completely obsolete, and F1 were not that bulk anymore, the reference 282 was renamed "Formule Indy" and recoloured several times. This way, it was "modern" again, and keep selling and selling in many different decorations.

UPDATE1 (JAN/2017): I just found a decoration I never saw before. It is the F1 Racing model in white and blue with "Elf" tampographies. This one is probably from the 1990s. 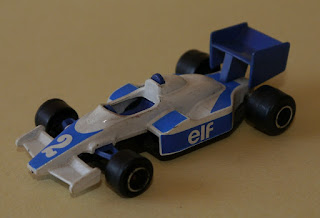 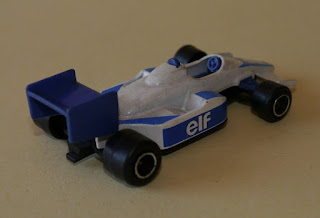 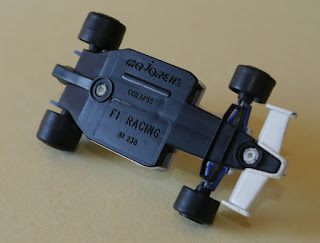 UPDATE2 (Dec/2018): I found two more formulas: an alternate version of the Ferrari and a F1 Racing in yellow, but with alternate decals. Both seem to be newer (90s) since they both come without the "Made in France" text in the base. 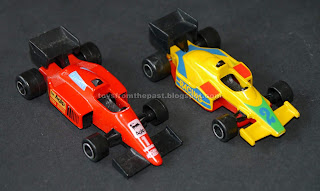 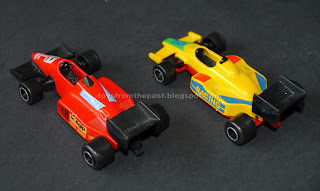 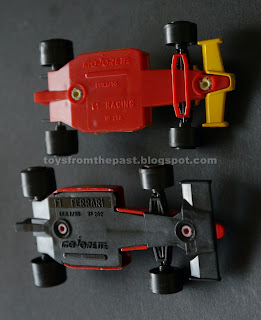 UPDATE 3 (Nov/2019): This model resembles the early 2000's Jaguar Racing F1, RN18 belonged to Eddie Irvine in the 2001 season, so this is probably the year in which this miniature was made. Note the horse instead of the Jaguar and the BCR publicity (HSBC in the real model). The cast is shared with the Ferrari (No. 282). 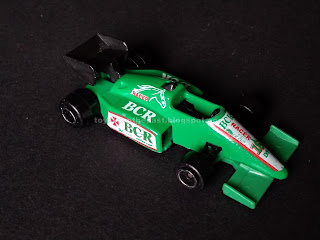 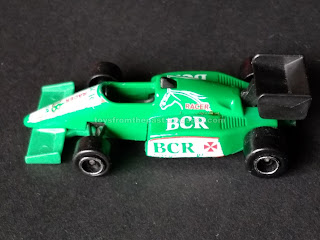 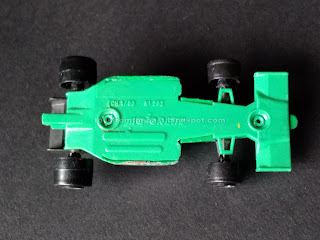 It seems that the Replica series (see #81 and #82) was a great success for Guisval. Only a few years after the release of the original series, a "junior" series was released. These were also classic cars from the 1930s or earlier, only in 3 inches size. These were, of course, cheaper.
In the 80s, the Models of Yesteryear were a great success worldwide, and some of them gained high value in only a few years. Many collectors wanted these, I think because the models represented were those that they had known and seen in the old days... currently, most of these models are extremely cheap, and can be bought for 5 Euro or less, some even boxed. I recommend the article from Der Spiegel (in German) which is related to collecting die-cast miniatures
No matter what, Guisval produced these models here by the end of the 90s, when the interest for these type of toys was at its highest.The Replica Junior series were actually two different ones, a Replica Junior series with cars only and a Replica Junior Transporters, with vans, trucks and buses. I present 4 of each subseries, it is easy to determine which one is which. For the original 1:43 series no “transport” vehicles were made.
The models I have found over the years are:
COLECCIÓN REPLICA JUNIOR:

Some models like the Packard were also available in the bigger scale Replica series, while other (most of them) were completely new models, never done by Guisval before.

These were all models available, notice some of them were available in different colours. 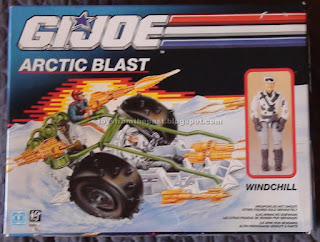 This vehicle was released in 1989. When I first saw it, I thought it was the coolest concept for a G.I. Joe vehicle ever, but today I don’t like it very much. Most people I know think similarly. Where do you go with such an overpowered sleigh? Would it be effective as an attack vehicle in the snow? The weapons included several machine guns and two missiles.

So complex as it seems, the vehicle is really easy, it is basically one big piece, the harness, two big wheels and a few bits. These bits (all in orange/yellow) have an uncomfortable property, as it is, that they decolour. Most of these vehicles in sealed box would have the following problem: the yellow bits decolour and the white body become yellow-stained. But stained in a very ugly way. It is not that original snow white any more, but depending on the exposition to the yellow parts, it might become really yellow. That’s why I opened my box as soon as I got it, to separate the yellow parts in an extra bag and prevent further damage to my Artic Blast. I don’t know if the American version have this same problem, but in any case, all European Artic Blasts have it. 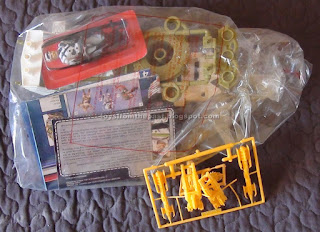 No matter what, I own this vehicle in its original box and, of course, its driver Windchill. This figure is truly great. It cames with an assault rifle and two skies (these have little guns at the tip of the figure toes). 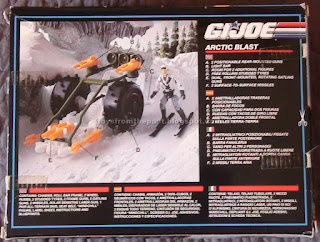 The box illustration is, as usual, excellent and the picture at the back is also great with that slope and the great scenery behind. Fun that the driver is outside the vehicle. 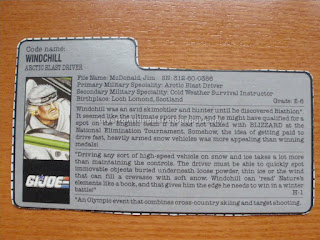 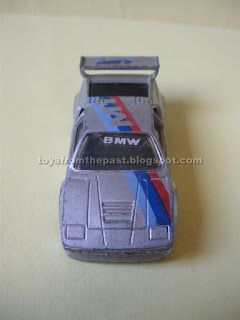 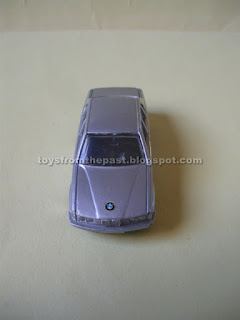 On one side there is the M1, which (I think I have mentioned it before) it is one of my favorite sports cars ever. It is also one of the first MC Toys I ever bought. Maybe I have dreamt this, but I recall that it came with stickers… that I finally removed. Strange, no other MC Toys model came with stickers. I like the sport lines tampographed on the car, but I think another colour would have fit better. 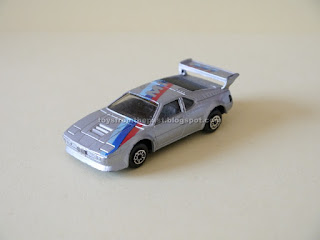 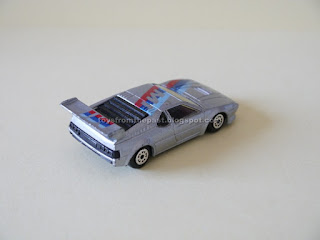 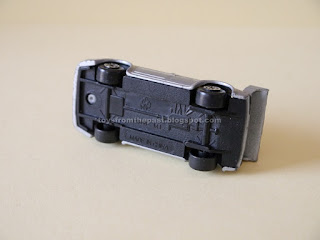 The second model is a 750iL, a somewhat rare choice in 1:64 scale. I don’t know of any other manufacturer who released this model in this scale. The color choice is great, it fits perfectly to a high-end sedan like this one. 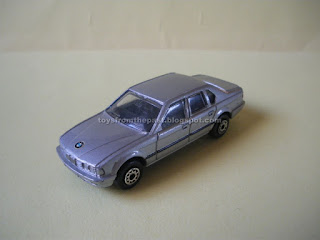 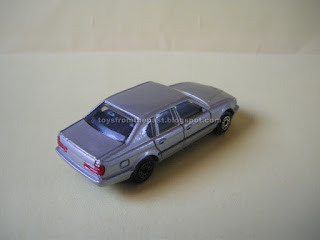 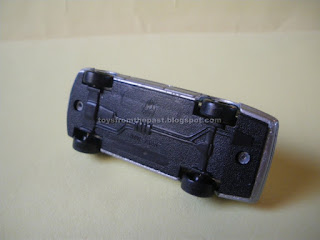