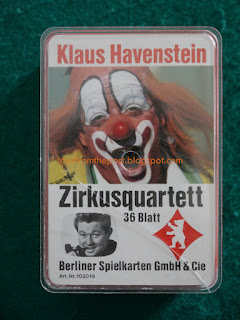 Klaus Havenstein was a German actor an also did voice dubbing in many movies, among other artistic activities. He was quite popular at the time of the publishing of this deck of cards. Shortly before, he also had presented a TV Show that explained how a circus worked behind the scene, and also wrote a book called “Die Stadt auf Rädern” (The City on Wheels in German) about the same topic. That is where the circus deck comes from.

It shows 9 families of four card each (quartets) and each family is devoted to one of the different shows that are usually performed in the circus arena: tricks with horses, wild animals tamers, acrobats, clowns and so on. The deck is over 50 years old, and, we see the evolution of circus, if we compare the pictures here with current shows. Some laws have been passed recently in which the use of animals is limited or even forbidden, while at the time, we could see wild animals like monkeys (mostly chimpanzees), tigers, lions, elefants, bears… The circus as such has also lost a great amount of importance in these five decades and today there are much fewer companies (or troupes) touring Europe, is rarely seen on TV, and it does not raise as much interest as 20 or 30 years ago. Actually is a shame that such cultural and artistic events are declining, or if not declining, that the successor or the evolution of these are not as attractive as it used to be. Children are today difficult to surprise or astound, as there are many options to see extraordinary things in short videos on Internet platforms. 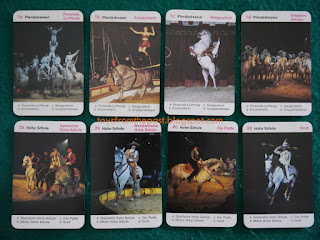 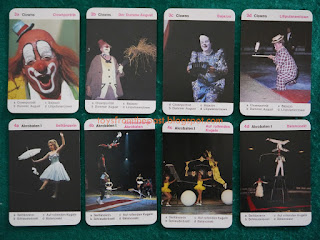 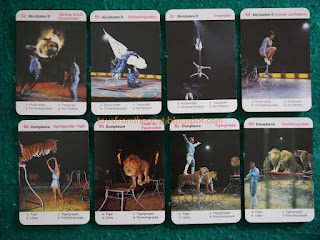 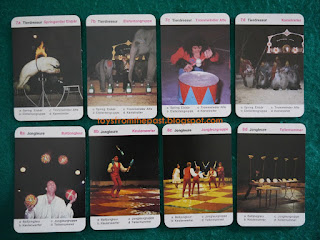 The deck is made by Berliner Spielkarten GmbH, which is a company that produced many card decks and also board games during the 70s and the 80s and that is now part of Ravensburger, after this company took over Berliner in 1999. Unfortunately, I couldn’t find much information on the web about the old Berliner Spielkarten Firm. Maybe somebody can forward me to an article or newspaper with information in German or English. 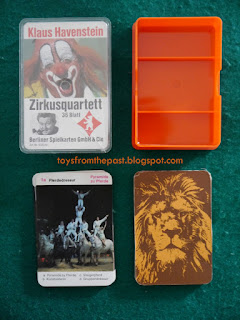 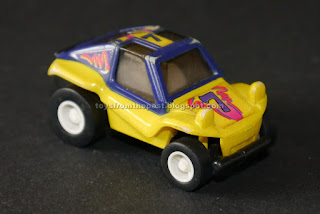 The Penny Racers (or, in Japanese, Choro-Q) are best known under the Takara brand, which is also the company that introduced them in 1978. They were based on a previous toyline called Mame Dash which was discontinued in 1980.

They are miniature pull-back cars with superdeformed dimensions (Choro is an abbreviation to the Japanese word for “cute”), in whose rear part there is a slot in which you can insert, if you wish, a small coin (f.e. a penny) and the car will drive on two wheels, making nice acrobacies on its way. There were a lot of tracks to go with and the variety was enourmous, as they encountered great success both in Japan and outside Japan. The license has even make it up to a dozen videogames and some Transformers sub-lines are also Penny Racers, not to forget the licenses awarded to Blue Box, Funrise, Tonka and others. Even it may seem strange, the original Japanese line was aimed to adult collectors, whereas Tonka version (called the Turbo Tricksters) is intended for children. There were all kinds of vehicles made, and they are still being sold in many countries, so it is a line that is still alive and producing many different models per year. 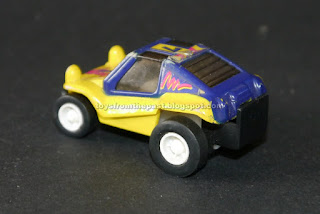 The blue and yellow buggy is my only Penny Racer, I bought is for one euro in a fle market around 4 years ago. It is a nice model with a decoration and colour combination that was usual in the 90s. You can read more about Blue Box Toys here. 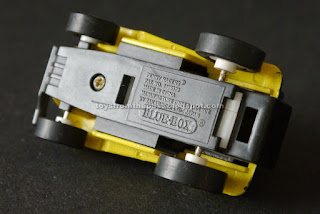 Another model which fits into this category of toys, but it is actually a knock-off is this Coin Chargers by the Hong-Kongese company Trafalgar. This one is clearly older (probably from the early 80s) and represents a fire truck. It was a gift from Steven and it is still carded, which is always nice to see. The instructions are in simple English and include some errors. The backcard shows other 5 models, but you can observe that the Coin Chargers were probably sold for very little money, as the quality of the package is rather low, although at the time, most products of its kind had (more or less) this quality. 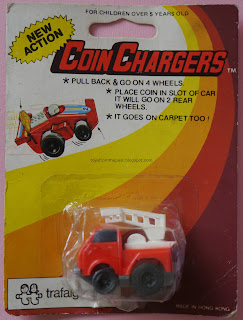 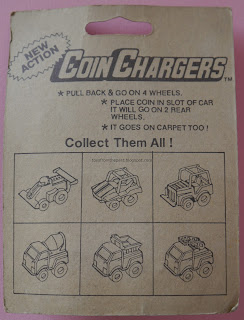 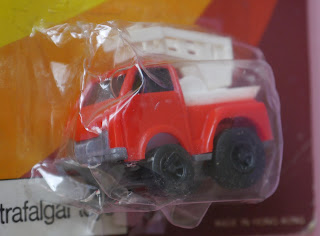 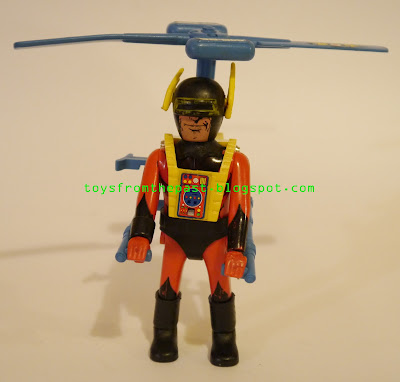 Capt. Laser and Spector were available, as usual, in their individual blister packs or in boxes with other figures, but instead of having one big-size vehicle, they came with a small helicopter-backpack.

The helicopter backpack is rather fragile, and can be found only rarely with all their parts and working. There is a button on the upper part of the backpack that mechanically activates the blades. 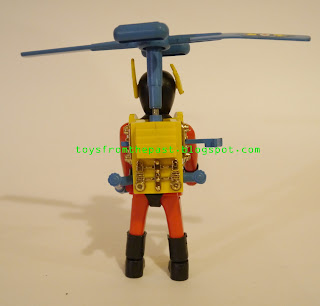 The backpack can be removed, although it is not recommended to do so as the wings on the head of Capt. Laser may suffer some damage in the process, or the backpack’s plastic may get some stress when forcing it open. Capt. Laser is one of the most fragile figures in the series because of these two wings. Many times they are broken and missing.

I keep this figure since I was a kid, I like very much the colours of the figure and their contrast to the colours of the backpack, mostly with some golden details. As any other reference of this collection it is now a highly valued collectable and very hard to find. 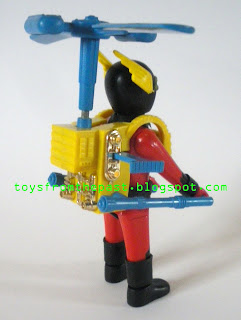 Although the prices are ramping steadily, I was able to buy on a recent auction this same figure carded. Here are the pictures of the fantastic blistercard. 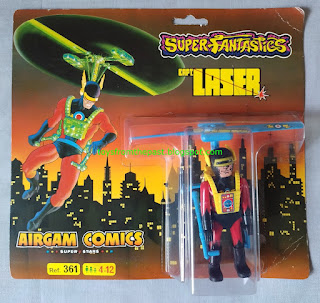 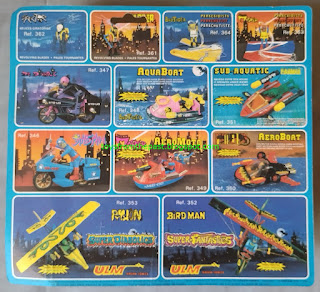 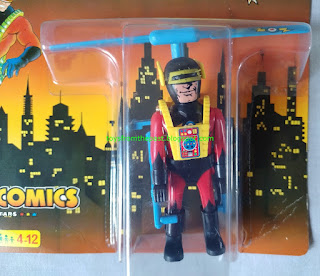 See more from this toyline here. 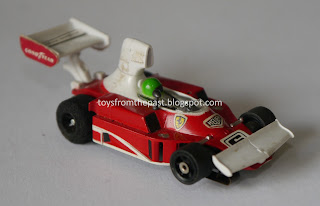 Sometimes you find surprises like this one. I was in a flea market, searching in a big box in which the seller had indicated “1 piece = 1 euro”, and found this nice slot car. I had no idea what it was, but I simply took it, and put it in the bag. It is actually very rare to see toys "Made in Singapore" these days, so I thought it might be something special. I recall that during my visit to the National Museum of Singapore, I found a small display of toys made there, but I don't have any memories of Aurora cars there...

Several days later I had the chance to search a bit on the internet. What was that strange Ferrari I had bought? I found this fascinating history here. 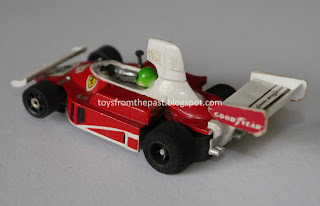 Aurora is the well-known toymaker from New York,  but this Aurora AFX was unknown to me. These small cars were the first to introduce the ground effect magnet to achieve higher speeds withour making the car impossible to drive. That is how the G+ or G-Plus (gravity plus) series was born. This was premiered in January 1975 and became an instant success, although Aurora was actually not doing as well and in 1977, the AFX line would be purchased by Tomy, that used the license in the Tomy AFX toyline. 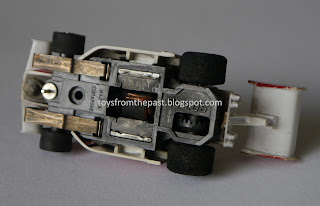 The car is slightly smaller than the usual 1:64, and it is missing a mirror, but it is otherwise complete, and I would say it is still functional, I didn’t try, I guess if I apply 9 V to the motor, it will start.

The model represents the Ferrari 312 B3, as driven in the 1975 season by Clay Regazzoni and Niki Lauda, but the RN 6 does not represent any of them. I guess this small f1 was among the first produced. The same model was also reproduced by Scalextric in Spain, but in a different scale. 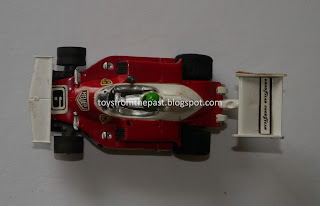