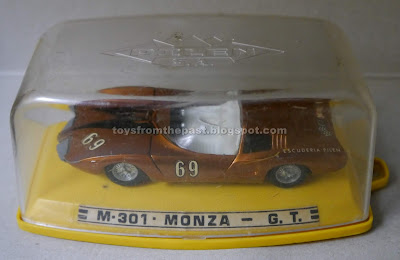 Remember that Joal and Pilen were both based in Ibi, which is a small town, where also Guisval, Mira and other famous die-cast brands were based. The companies had family relations among them and it was not rare that casts went from one factory to the other.

The differences are clear. This model was simplified in order to produce it cheaper and does not have an opening bonnet. Just the cockpit can be opened. I would say, otherwise Pilen and Joal models are identical. 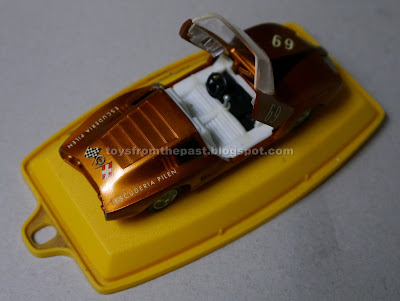 The cast debuted as Pilen in 1971 is a red and white version. The Joal version was two years older. In the 1973 catalogue it is the first time that this model is pictured, although there were another one with chrome finish. This last one does not appear in the catalogues, but the chromed versions are common for many Pilen models, so this one is no exception.

I like the decoration, which is rather simple. It carries race number 69, the words Escudería Pilen and two crossed flags.

This model is boxed, so we can observe that it came in a jewel box with yellow base, in which a sticker is placed with the reference number and the name of the car. I think I have shown these kind of boxes by Pilen before.