By the end of the fifties, and because of the invention of the television, wrestling had a “golden age” in many parts of the World. I have heard many references to wrestling nights in Madrid, where the actors usually adopted an English-sounding name. Many of the wrestlers were retired boxers (boxing was also very popular back then).

But that’s nothing compared to Mexican wrestling. There, wrestling was a popular entertainment much earlier. They improved and brought new elements to the game, and I am not talking about the masks, I am talking about new good vs. evil plots, background of each wrestler developed in a way to make children feel sympathy (or the opposite) for them. This storytelling would be made perfect in the late 80s by the American WWF. The Mexican folklore is also present in this kind of show with wrestlers like “El Santo” (The Saint) or “Demonio Azul” (Blue Demon), clear references to a religious background, or Mexican traditions like the “Day of the Dead” with those flower altars and skulls. 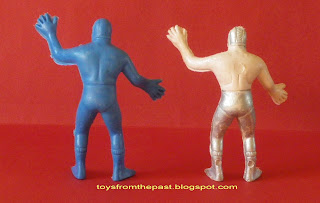 It all started much earlier, maybe as early as 1900. At the time wrestling was organized locally, but in 1933 a man named Salvador Lutteroth founded the first national organization to promote wrestling and draw the best wrestlers from each city or region. This organization was called: Empresa Mexicana de Lucha Libre, where “Lucha Libre” is of course the Spanish word for “wrestling”. After a few years, and with the deployment of television in homes, the enterprise was able to reach millions of people, making the sport more and more popular and creating the first superstars.

Wrestlers became very famous. In Mexico, some wrestlers, like “El Santo: el Enmascarado de Plata” (The Saint: Silver Masked), “El Demonio Azul” (The Blue Demon), “Mil Máscaras” (Thousand Masks), or “Gory Guerrero”. Each had its particular gimmick and became popular for one reason or the other. Some invented movements, other made great exploits, other were simply very charismatic, some were life-long rivals…

The most famous, however, was “El Santo”, whose carrier spans over 5 decades (premiere 1942). He made a lot of movies, where he always fought for justice, and he was the main characters in numerous comic books, graphic novels, books, magazines…

According to this great article by Delia Madrigal, there are almost 300 mexican movies starred by wrestlers, being the first ones filmed in 1952. The movies were a little bit like the shows: good vs. evil were the defenders of the law hide (often, but not always) behind a mask. Some of those movies were a really bizarre mixture of comedy, drama and science-fiction. Just a few titles starred by “El Santo”:

It was just a matter of time that toy figures would be manufactured. During the 70s, the first figures were around 14 cms high, and they were made in two different versions: the first one was the figure with one hand up, and the other down, just like the figures in this article. The second version had both hands up. These two gestures were respectively “The Saint” and “Blue Demon” in the cover of and old magazine called “Box y Lucha”. 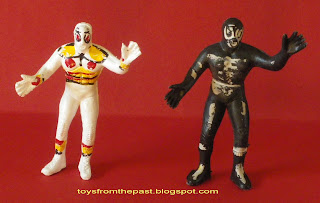 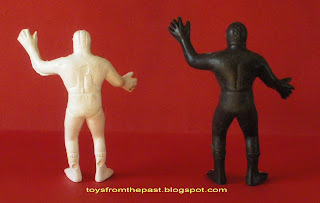 Every figure is a little piece of art, since they’re hand painted, and therefore unique. They were never high quality figures, look at all those rough edges.

Some of the figures included cloaks, which were made of plastic bags. If any figure brought that cloak but has been played, the cloak is guaranteed to be broken and missing.

In the 80s, the figure were adapted and reduced. The new casts made figures of 10 cms height. They were marked in the head. These days, figures are around 8,5 cms and are still being manufactured in Mexico. The shrinking is surely a way to reduce production costs.

Sadly, these figures have less and less sales each year. According to the article I mentioned before, Mexican children are not interested anymore in such an old toy, that hasn’t changed since the times of their grandparents. Of course they prefer more modern means of entertainment, like any other kid anywhere else, but apart from this, new articulated figures are being promoted by different wrestling associations, so there’s no more room for these figures anymore. Most of them end in collector’s hands. Like these four.