These toys are among the most recognizable novelty toys of all times, as they have been manufactured more or less continuously since at least 40  years by many companies around the globe and sold per unit or as a premium for chocolate eggs or similar snacks.

These are, however, the original ones, made by Bruder in what, at the time, was Western- Germany. Bruder is one of the most important toy manufacturers in Germany today, and its main product line today is a series of 1:16 scale vehicles and figures called bworld, which has an excellent quality. We have a couple of these at home. They started in 1926 by manually making finger buttons for trumpets, and expanded into plastic toys in the right moment, with the purchase of a plastic injection machine in 1958.

But today we are going to talk about the Bruder-Mini toyline that debutted in 1981, although the company made other small and unexpensive plastic toys before, such as trumpets, whistles, guns… They were all immensely popular due to its low price and their variety.

The innovative idea was to make vehicles that could share parts among them, reducing the costs for tooling and manufacturing. That is, if you make a series of trucks, all will have the same base, and cabin, but the load will vary from one to the other, or if you have spaceships, you’ll design them in a way that the cabin will fit in several bodies, or the antennas can be attached to several different bodies. This was the main idea of the Bruder-Mini toylines, together with roughness and keeping the prices very low.

The very first series was the truck’s, later extended with other construction machines, but many other followed, such as, old cars, planes, trains boats, space toys, these sport cars, standard cars in H0 scale… and even more. Some are larger than others, the trucks, for example, are maybe the smallest ones, being slightly larger than a Micro Machine, while the sports cars or boats are closer to a 3 inches car than to a Micro Machine.

Among all different Bruder Mini series, this one is the only I can claim to have completed. There are 4 different models in total, although the colour combinations probably make a few dozens. They are not very easy to spot, but sometimes you find them mixed up with other types of toys. Originally, they were sold loose out of big buckets (see pictue below), or in smaller blisterpacks or bags 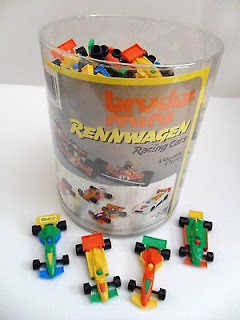 I am not sure which cars do they represent. I would say the red one in the big picture is a Ferrari, the yellow one in the same picture could be a brabham (looks a lot like the Majorette model) and the third F1 could be really any other (has a large spoiler). The sport prototype is also generic, I could not identify it.

I wrote extensively about Mini Bruder in the 24th issue of Figuras En Acción, maybe you want to take a look at the article you'll find HERE.