This car is one of the best-selling cars in the history of automobiles in Spain, and also one of the most successful die-cast models made by Guisval. It was also reproduced by the most important die-cast manufacturers at the time: Matchbox, Majorette, Polistil… the Guisval version, although not so well finished, it is still beautiful, especially in some of its variants.

The car first appeared in 1975 catalogue, in orange with the classic first generation wheels, but I do not have this model. It is very interesting that Guisval changed the colour only after 10 years, so most of the versions you’ll find of the basic version are orange.

For example, the second generation from 1979 came with chromed base, and the third from 1983 with black metallic base, but otherwise, they are difficult to tell between the two. The third version is generally darker than the second one. Note the models in the pictures. Note that this model depicted individually is different from the one in the group picture as it has two round holes in the base, while the other has the two frames which came later. Also the colour of the windshields is different, so I guess there are many variants out there to be catalogued, as it happens with models that had very long runs. 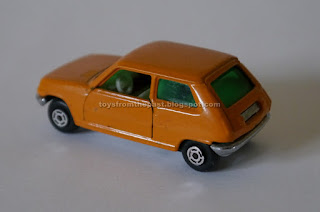 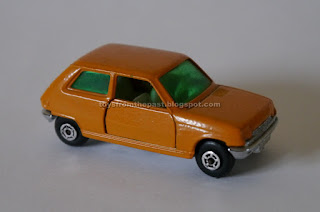 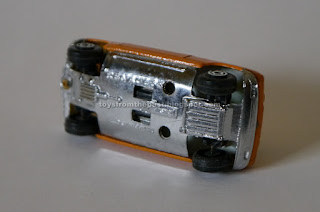 Finally, in 1985, the colour was changed to light blue, and it still kept its metallic base in black. Up to then, it always kept the number 14 in the Campeon series.

The rally version is one of my favorites, and I keep it since I was a child. It came with that mud flaps in red plastic that is so representative of Guisval models. This version ran partially in parallel to the previous one, so it carried a different number in the series, and it was 51. The first version appeared in 1980 and was released in yellow with decals. This reference also lived long, and first in 1987, it changed the base to plastic, and the decals to stickers, but the base colour remained.

Having practicable doors, it was never available in the Club series, but some R5s were part of sets like this one here, in which a yellow body was released in the standard version and not the rallye one.