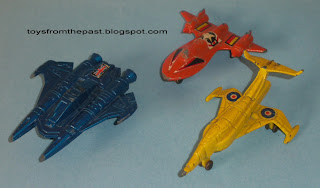 I have had these spaceships for more than 15 years now. I found them on a flea market in Spain and despite having no inscription on the lower part of the body, I bought them.

I guessed they had to be already quite old, since they were beautifully casted and very heavy: they’re 100% metal, without a single plastic part. At first sight, I could notice it was not one of those Chinese cheap “die-cast” toys that had arrived only a few years earlier to “100 pesetas” shop (the Spanish equivalent to modern 1 Euro or 99p stores), and that were already quite common even in flea markets. 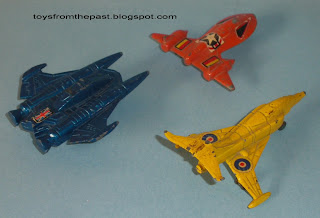 I can’t remember how much did I pay for them or any other detail about that purchase. Recently I saw them in a box again, and thought they would make a nice blog entry, if I could find who made them, when, or any other information.

I’ve been making some research on them, and it’s a hard work. First I concluded they’re surely made in Spain. 15 years ago, almost nobody had internet at home, so it is unlikely that they were purchased abroad. 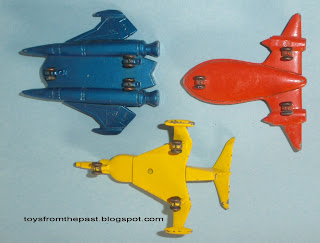 They could be, of course, imported, but comparing them with similar foreign toys (Zylmex for example), I noticed some differences, especially on the wheels. Any other major company like Corgi or Matchbox is automatically discarded, because they mark all their products.

Another hint comes from the fact, that I found no pictures of these vehicles anywhere on the internet, except in todocoleccion.net, which, if you don’t know it yet, it’s something like the “Spanish eBay”. A seller had three spaceships and sold them for 6 Euros each a while ago. So, the country of origin of these spaceships is Spain.

I asked Woodsy from Moonbase Central to identify the spaceships for me, and he returned me the following picture: 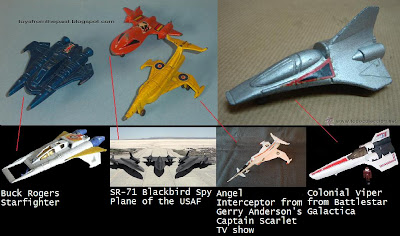 Grey model picture was taken from todocoleccion, this model does not belong to my collection. 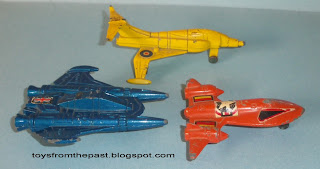 Spanish toy manufacturers that made planes are at least 3: Mira, Pilen and PlayMe. The first two were based in Ibi (Alicante) and the third one in Beniparrell (Valencia).

They also marked their toys with almost no exception. Mira for example left its “ship”series unmarked. The reason this time could be that the manufacturing company wanted to avoid any legal problem for “copying” models from those films and tv-shows, but this is only a guess.

I have remarked that the wheels used in the spaceships are virtually undistinguishable from those in Pilen or PlayMe models. I have checked some catalogues from these companies, but I found nothing about the space-series among planes. Maybe they were manufactured by another company.

An interesting thing to mention before the article comes to an end, is that the spaceships are decorated with stickers: One of them is the British flag, another is the (British) Royal Air Force insignia and in the third model, the star from the U.S. Air Force as well as some decorative stickers. These stickers are made of paper, not plastic. Similar stickers were used by Mira in their later models but not by Playme or Pilen, that used decals. 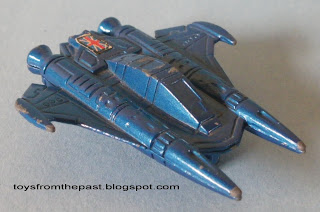 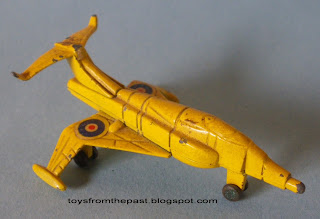 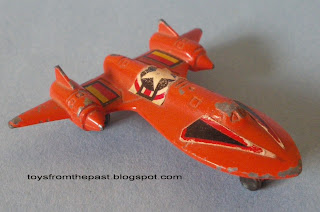 I don’t know which models other than these 4 were ever made, or in which kind of box were they sold, so I cannot really tell much more about them. I have also contacted other toy experts in Spain, but I got no definitive answer yet. If I get some information I’ll update this entry. If you have some information, please write me. You’ll find my email in the upper right part of this page. Thanks! 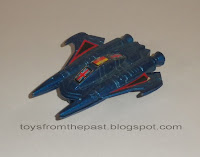 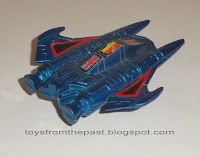 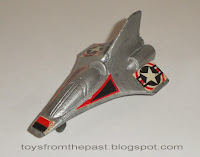 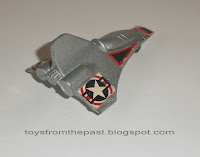 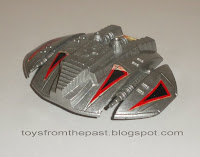 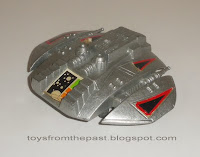