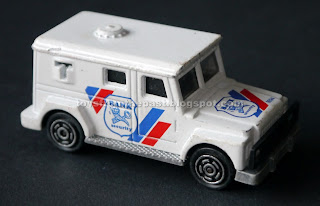 Majorette's Bank Security Van is one of those models that I had not known until recently. It was only a few years ago that I saw it for the first time. I have it now twice and I like them very much. The Matchbox model, I have it since a long time.

This type of vehicle is kind of rare, only Matchbox has a similar one which is also very nicely done with plastic roof, but it was just a matter of time that Majorette got its own security transport van.

The Majorette model has a practicable door on the rear part, so the playability is somewhat better than the Matchbox model, that has no practicable parts. Both look bulky and strong, like the real security vans, although the Matchbox model was made earlier and has a slightly older look today.

The Matchbox model was originally released in red with white roof in the year 1978, but a later and rarer version "Drescher Bank" can be found in green. Both have several variants depending on the shade of colour applied, window colour and so on, the usual stuff. 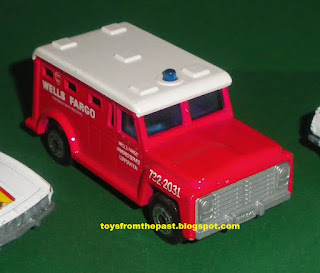 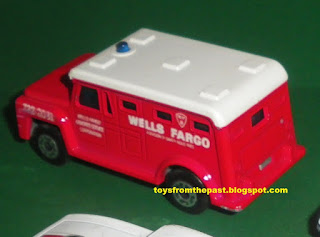 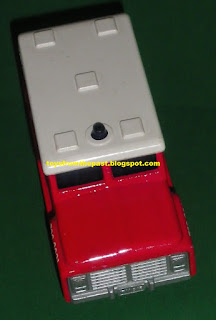 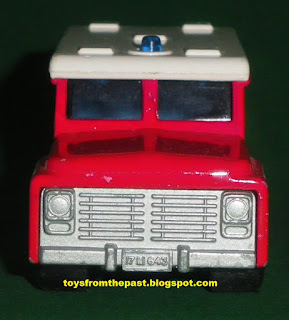 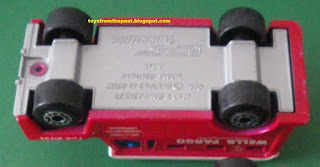 On the other hand, the Majorette model is available in many different colours and decorations, some of them very recent, since the look of the truck is still modern, or at least it was until a few years ago, I have seen more modern driving around the city.

The first model seems to be the greenish blue one, that first appeared in 1980 catalogue. Although not very clearly, we can see that it has a decal on the bonnet. We think this model was a prototype, because in the catalogue from 1981, we already see the famous model in metallic blue, one of the most common ones.

In 1982's catalogue, the van appears in grey with a decal on the bonnet with the text "BANK" and two crossed keys. 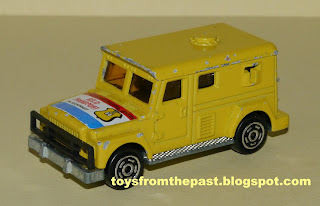 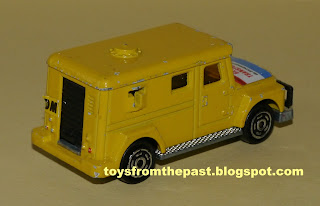 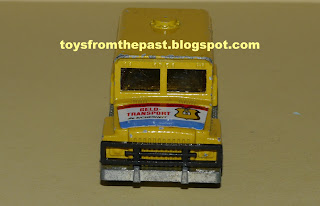 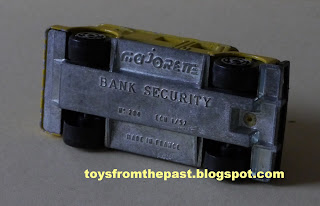 And every year a new decoration: in 1983, it was presented with some red and blue stickers on the sides, In 1984 with "post" stickers, in 1985 with "Bank" Stickers on both sides, and in 1986 the model presented in this entry. All of them in yellow. Note that the card depicted is the German version "Geldtransport", not the most usual "BANK" version. 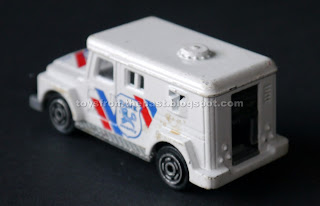 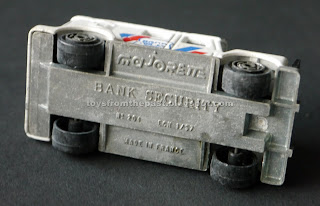 And finally, in 1987, the most usual white version came out. This one was available during, least, three consecutive years. In the 1990 catalogue it appears in light silver, but keeping the tampos, although this may also be a prototype, because I have never seen it, and the following year, the picture appears in white again.

That appearance in the 1991 catalogue is the last for a long period of time. More modern versions of the van (Made in Thailand) are available in other interesting colours, like dark blue, but then it becames difficult to follow how many, which tampos they carry and so on.

Sorry for the bad photos of the Armoured Van, I'll replace them soon.