We will now continue with the last article and take a look at the different blister types, designs and artworks for these two waves. 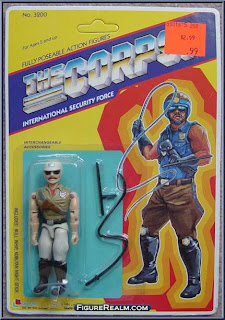 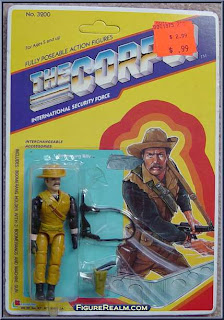 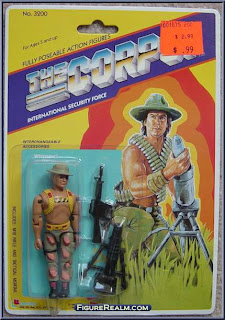 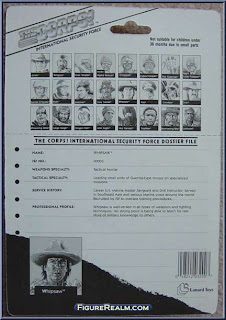 Wave 2 blister cards were identical to those in the first wave, but with a yellow background instead of blue.
The packages were new designed for wave 3 in many aspects. First and most notably, the colour of the blister was changed to black, and the blister card shrank quite a bit. The artwork does not depict anymore the figure which is being sold, but Steve Wyoming.

In the pictures above, I have selected three characters: a new one (Chopper), an old one in v1 version (Boomerang Billie) and an old one in new "clothes" (Whipsaw). In the backcard are 30 figures depicted ("last 6" are missing because they were not released yet). 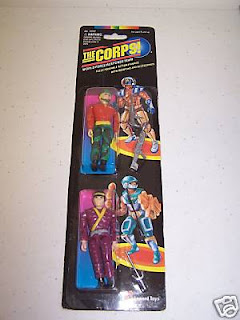 
Similarly to single packs, yellow double and triple packs (2nd wave) include the artwork of the figures in each pack, while black packs (3rd wave) are all the same and include the artworks of Steve Wyoming and Brickwall (in an interesting green “variant”) (doubles) or Steve Wyoming, Lightning Mobutu and Sensei Kabuto (triple). 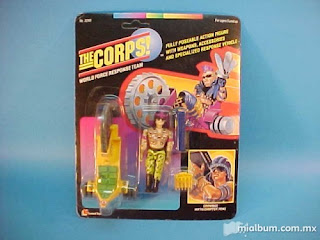 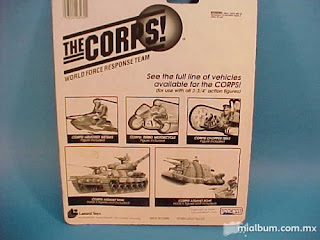 John Eagle and Crowbar are new "v3" versions, Crowbar is depicted above, while John Eagle has a completely orange outfit.

It is interesting to mention that some of the “new” figures in wave 2 were re-released in wave 3 and, although the figure remains unchanged, the weapons’ colour vary from one to the other. In the yellow packages, most figures (and most notably the 6 new ones) have black accessories, while in black packages, these accessories turned red or yellow/orange.


And to finish the article, 8 more figures: 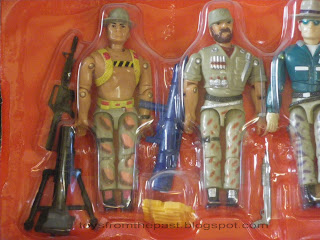 This figure was recoloured to be some kind of desert trooper while v1 was more a jungle trooper. Both versions come with bare chest and both with camo trousers. Camo pattern in v2 is one of the strangest I have seen.

Large Sarge is another character whose uniform has changed from jungle camo to desert camo. V2 is now light brown with dark brown camo and silver details. His bazooka is dark blue and his backpack orange, the usual change of colours from v1 to v2. 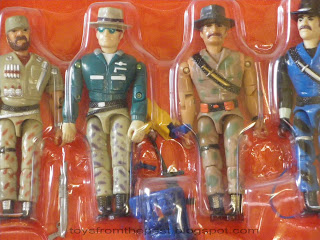 Another figure whose v2 came with different colours, although this time, these colours are not bright. Green jacket and light brown trousers with dark brown camo. The first version came with a brown jacket, as if it was Indiana Jones. The weapons are the grey gun and the rifle available with v1, only the rifle is dark blue instead of black.

Although it doesn’t look much like the first version, v2 came with very militaristic colours, including green camo over brown trousers and shirt. It is a slightly different approach. The figure came with a black missile launcher and a dark blue backpack. The same weapons were available with v1, but the backpack was black instead of dark blue. 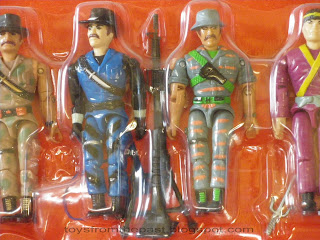 This figure came originally with a jungle camo uniform that has now been changed to a greyish light blue with pink camo. I guess it is some kind of sailor troop uniform, or maybe a night force commando, who knows. The change however looks great and the figure seems to be a different one. Same weapons as v1: black rifle and two-pieced mortar. 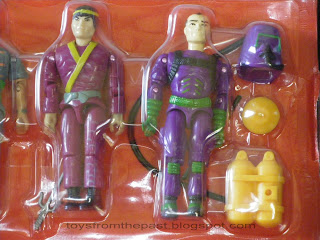 Ninjas and martial artist can wear what they want! This time, the grey kimono has been replaced by a purple one with yellow details. I think it is not a bad repaint. Weapons are the grey sai and a black nunchuk, just like v1.

This new figure introduces a new concept in the game… maybe influenced by the eco and environment care trend, corps designed a figure would also fit in the Captain Planet series: some kind of nuclear power plant worker, with some strange devices to clean radioactivity. The figure comes in purple, and include great accessories: a purple helmet, an orange backpack, a black cable and an orange device. The last three attach together. Great Figure.

Name: Toxic Waster
ISF No.: 00198
Equipment Specialty: Toxic waste neutralizer and reclaimer, chemical analysis backpack.
Tactical Speciality: Access and evaluation of hazardous chemical situations. Pathfinder for the elite group of toxoids.
Service History: Trained as a chemical engineer, specializing in neutralization processes. He was working as a nuclear physicist when ISF recruited him for an unusual mission. He decided to stay.
Professional Profile: One of the hardest Working guys in the security business. He is a walking library of chemical and technical data. The professor type, but when a situation occurs, it’s knuckles and knowhow.